Edited by Giulio D’Errico, Attitudine Riottosa will be published as both a print and electronic book and is available to order online direct from the publisher’s website. A PDF of the Introduction to the book is available as a free-to-download sample. A full list of the writings included can be found on the Contents page.

«Anarcho-punk is an attitude, a political way of acting from below that still influences activists around the world today. Cut and paste. With scissors or with the computer. This book is a kind of punkzine: a set of dissonant voices, stories, memories, documents and essays that tell and analyze the story of anarcho-punk across the 1980s in the United Kingdom.
Through a varied microcosm of personal and collective experiences (squatting, concerts and events, alcohol and drug abuse, travel and festivals), anarcho-punk has managed to reinvent the approach to militant struggle, a new “sentimental education” in politics in a decade that saw the defeat of social movements and the rise of a globalized neoliberal regime.
This development unfolded in London, but also Belfast and Bristol, the industrial centers of the north of England and the moorland of the south west. The twelve chapters of this volume, each written by those who experienced the scene first-hand, present for the first time themes often overlooked such as: the role of punk in breaking down social, political and religious divisions in Northern Ireland; the importance of zines in intellectual training of young punks; the Stop the City demonstrations in London in 1983-84; the punks’ interactions with the striking miners; the contribution of feminism and animal liberation theory – and also the less productive political dead ends from which not everyone has managed to escape.
Giulio D’Errico is a historian and an independent researcher, he obtained his doctorate in Wales and deals with social movements and migratory flows. He lives in Athens and collaborates with various projects on the margin between activism and volunteering. He writes for the bulletin on migration in Europe “Are You Syrious?” and for “A-Anarchist Magazine”


Editor Giulio D’Errico spoke to “The Hippies Now Wear Black” about the project.

What’s the story behind this book project? What did you want to achieve?
GDE: The idea of the book started during the research for my Phd in Aberystwyth, Wales. I was working on a comparison between Italian andBritish squatting movement from the seventies onwards.
Along with many stark differences, I was struck by the similar role that punk – and anarcho-punk especially – played at the beginning of the eighties in cities like London and Milan, providing a sort of ‘sentimental education’ in radical politics for a generation for whom the rallying cries of the seventies were no longer working.
I discovered the books like the Tales from the Punkside series and The Aesthetic of our Anger there, and as soon as I had time, I started to work on a plan for a collection which could make sense for an Italian readership, both young and less young, a book able to map the differences within British anarcho-punk, beyond London and also beyond Crass.
It’s been a way to escape the rigid framework of academia, and to propose a different way of history-telling from below.
«The real difficulty was deciding what not to include. The first content list I drafted included 25 to 30 chapters.»

Can you unpack that phrase ‘sentimental education’ a bit more? I’m wondering if you mean ‘moral’, ‘philosophical’, ‘political’ – or something else?
GDE: By ‘sentimental education’ I mean a channel or path of political and pre-political growth. I believe punk and anarcho-punk played a big role in helping a generation to ‘read’ and understand radical politics through the eyes of personal experience – feelings – more than through ideology.

How did you go about selecting the articles that you wanted to republish? Was it difficult to finalise a list?
GDE: The real difficulty was deciding what not to include. The first content list I drafted included 25 to 30 chapters. It’s been a real pain to exclude some of them, and I hope to be able to include them in some other future publications.
I worked with the idea that the book should appeal to both those who have lived through the Italian anarcho-punk scenes and know about the British ones, and those who know nothing about it.
For this reason, and with the invaluable help of Mike Dines and Russ Bestley, I selected the backbone of the book mostly from Tales from the Punkside and The Aesthetic of our Anger, which provide more extensive background, and used chapters from Some of us Scream, Some of us Shout and Not Just Bits of Paper as companion pieces.
«When I contacted the folks at AgenziaX, I knew it would appeal to their enthusiasm for radical history»

Translation services can be expensive and time-consuming. What methods did you use?
GDE: Lucky me, then! To survive my Phd I started working as freelance translator, and discovered I really like it. So I took on the translation work for the book.
It has been extremely time-consuming, especially because I’ve been working on it in my free time, between jobs, personal ups-and-downs, moving from the UK to Greece and other things.
I committed to this project from the very beginning, and have never thought about it as a ‘money making scheme’. When I contacted the folks at AgenziaX, the independent Milanese publisher of the book, I knew it would appeal to their enthusiasm for radical history. But I was not sure it would ever come to anything. I’m so glad it did – and for this I wish to thank Paoletta “Nevrosi” Mezza, Marco Philopat and Nicola Del Corno for their support.

How much material in Italian has been written about this subject before now?
GDE: In book format, on anarcho-punk itself, not much. Ian Glasper’s The Day the Country Died was translated for an Italian edition as well as George Berger’s The Story of Crass, which was published in Italy by AgenziaX’s ‘older sister’ Shake edizioni, a publisher which was funded by activists involved in the eighties’ anarcho-punk and ‘dark’ scenes, and later the cyberpunk scene.
«We are planning some outdoor events in Milan, Rome, and other cities to promote the publication of the book.»

They have translated other books that touch upon anarchist punk, as George McKay’s Senseless Acts of Beauty and Stewart Home’s Assault on Culture. Some other things were published about Crass, and very recently another historian published a book about music and politics in Italy and UK.
Some pretty interesting stuff was published in Italian zines in the eighties – written at the time when these things were happening. The first anarcho squat here in Milan – named ‘Virus’ – hosted a concert of Disorder, from Bristol. Travelling from Leeds, Chumbawamba played in a squat in Rome. These kind of connections, and bands visiting different places while on tour, meant that quite a lot of information was shared between activists from the two countries.

Will the print version of the book reach the shelves of Italian bookshops and libraries? How are you planning to distribute the print and electronic versions?
GDE: The original plan was to publish the book in April of this year. But because of the Covid-19 lockdown measures, and how the bad the situation was in and around Milan, we decided to postpone. Now things are starting to reopen.
The book will reach some bookshops and libraries in the north and it’s available both in print and ebook version on the publisher’s website. In the last months, with the forced closure of bookshops, online sales have picked up.
Physical gatherings, such as face-to-face meetings, are still a problem though, at least indoor ones. We are planning some outdoor events in Milan, Rome, and other cities in the next weeks to promote the publication of the book.
«This book series tries to refocus the attention on countercultures bringing together activists, witnesses, researchers and fans.»

Who do you hope the book will reach?
GDE: I hope this book will reach both those who lived through the eighties here in Italy and will able to find something that reverberates with their own experience, and a younger audience, of my generation – I was born in 1984 – or the youth of today.
I appreciate the connection that some academics in the UK have made with their ‘punkside’, stimulating networks and research, but at the same time preserving the ‘anarcho’ side of it from being devoured by the academia, participating and fostering non-academic publication, and allowing for other voices to emerge. It’s not always like this.
And in Italy this is something that is missing. That’s one of the reasons for the book being published with AgenziaX, and especially within the series Moicana: Università della strada*, which tries to refocus the attention on countercultural practices, bringing together activists, witnesses, researchers and fans. [* Approximate translation – “Mohawk: The university of the streets”]

Do you see any reflection of the first wave of British anarcho-punk in the present day Italian punk and countercultural scenes?
GDE: That’s difficult to say. As the Free Association have pointed out, contercultures that we have seen in the past decades were linked to material conditions that today may be quite different.
Punk in Italy was never the mass phenomenon that was in the UK, and the innovations of anarcho-punk have continued to echo through the radical movements of the following decades, especially in respect of the ‘social centres’ movement, which still survives to this day.

Has the story of Italian anarcho-punk been written? Is that the next project?
GDE: Definitely not all of it, but some has. The memory of eighties’ Italy – especially in radical circles – has too long found itself squashed between the ‘heroic’ and ‘tragic’ seventies and the revival of the nineties, that saw new mass movements emerge.
It’s become a period historians have neglected. Hopefully that won’t be the case in the future. Maybe it’s time to translate material from that period into English…
di Rich Cross
tags
Giulio D’Errico
Attitudine riottosa
anarcopunk
UK 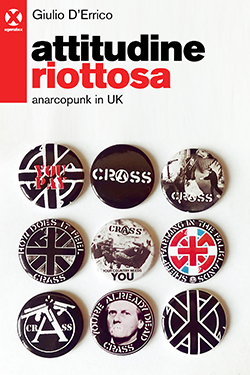